HDR and Its Many Formats 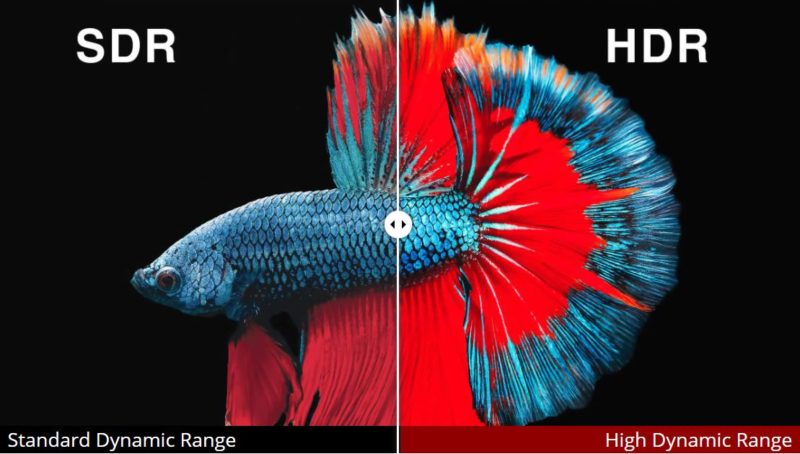 For decades, televisions and other video exhibition devices have only been able to reach a certain level of color and depth of brightness (luminance).   Technological advances have removed these barriers in large part. A growing number of competing standards for High Dynamic Range (HDR) enable increased signal information to reach these devices, allowing them to reach ever-greater depths of color and luminance.  As with all competition around competing standards, the industry has to struggle to keep up with these evolving and competing standards while taking advantage of the visual improvements that they facilitate.

HDR stands for High Dynamic Range, and it’s become one of the hot buzzwords of late.  As with all technical advances, the topic can get pretty complex pretty quickly. At the most non-technical level, HDR enables a richer, deeper, and brighter color range on exhibition devices such as televisions.  Multiple standards are competing to define just how the industry implements HDR. This standards competition has many repercussions on the media and entertainment industry. Post-production shops need to understand what these effects are and how best to adapt storage architectures to accommodate workflows involving HDR-compliant content.

HDR.  It’s an acronym you’ve probably been seeing a lot lately in media and entertainment articles.  High Dynamic Range (as opposed to what we’ll call Standard Dynamic Range) is a technological improvement in the way televisions and other devices display video.  Sure, we’ve witnessed lots of improvements in video displays over the years, so what’s the big deal? It’s a fair question, so we’ll dig in there.

Let’s use an analogy to explain what the big deal is with HDR.  Much like drinking very fine wine, which often takes a refined and well-trained palate to process and can’t necessarily be fully appreciated by the novice palate, many visual improvements are so subtle that only hard-core amateur or professional videophiles can appreciate the technological advance.  HDR is different, though. Because of how HDR affects a video signal which is then displayed on an HDR-compliant device and perceived by the human eye, the vast majority of viewers can immediately detect the improved visuals. And that’s a big deal.

It happens all the time—a technological advance spawns a competition between variants and arguments about which one was first and which one is best.  It happened with the advent of calculus those many centuries ago, and it is happening with HDR now. Different industry players are pushing competing standards of HDR, making its adoption both slower and more fragmented.  But no worries! As with all things technical, it all ultimately comes out in the wash, as the saying goes. In the interim, media and entertainment organizations—and especially their post-production shops—need to be aware of how the current state of HDR affects their operations, activities, and post-production workflows.  We’re getting ahead of ourselves, though. Let’s first take the technical mystery out of HDR.

As we defined earlier, High Dynamic Range, or HDR, refers to the technical capacity to display increased color depth and luminance.  Whether you knew it or not, televisions and other types of exhibition or video displays have been showing a standard range of color and brightness for many, many years.  This meant that the gradation of color displayed by televisions was fairly narrowly restricted. Black was only so black, and the same with the other colors in the spectrum.  Keep in mind that this situation was an outcome of where the technology was at the time, not necessarily on the human eye’s capacity to process and detect greater color and brightness ranges.  Our eyes and our brains, working in tandem, are actually wired to detect far richer and deeper ranges. With HDR, this all changes, with a resultant video signal that carries a pretty heavy wow-factor.

So what changed? As with everything in the digital era, it comes down to bits and bytes. We won’t get bogged down in the complexities of binary math—we simply want to stress that the standard color range was expressed with a certain number of bits (8 bits, to be precise).  HDR as a standard defines an increase of 2 bits of information, for a total of 10 bits dedicated to the color and luminance of the video signal. By the way, before you poo-poo those 2 bits, that’s quite a bit of digital information (pun intended) which can be expressed in those additional two bits (it is, after all, a 20% increase in information within the signal).  And that increase is very much detectable by the average, non-videophile eye. To the audience, it creates a visual experience far beyond other advances.

Take greater resolution.  What we think of as display resolution can be referred to as spatial resolution, or the number of pixels comprising an image.  The higher the resolution, the better the picture, right? At least, that’s what TV and camera vendors have been marketing for years—we get it, more pixels, more money.  And sure, if you walk right up to an 8K monitor, the vastly increased spatial resolution is absolutely noticeable. But who watches a movie with the display inches away? For the most part, that close of a viewing range is limited to VR experiences.  Move back to a normal viewing range and look at two displays side by side, and the average viewer may not be able to see an appreciably better picture between the 4K and the 8K television.

Greater resolution in color gradation and brightness, however, is a different story.  Chromatic resolution is much more noticeable at any distance, because it enables the human eye to perceive a more life-like depth of color with more striking contrasts due to the enhanced luminance.  Now you can see why HDR is getting the press that it is.

As Zack Charney Cohen (ZackCC), a workflow specialist at OpenDrives and a professional colorist, observes, “Imagine that a device is displaying 256 colors per channel and then it suddenly increases to 1,024 colors.  That’s a lot more specificity in color definition, and it’s definitely noticed by the audience.”

The Different Flavors of HDR

Remember HD-DVD?  Better yet, remember Betamax?  In the never-ending standards wars, we can always point to the clear favorite as well as the also-ran.  Before we give the impression that the winner is the “better” technology or that the loser is the “worse” one, it’s a much more complex equation than that.  The question of a standards winner involves technology, brand marketing, early adoption, and flat-out customer perception, along with a host of other variables.  The good news for consumers is that, unlike previous standards wars such as the examples given above, a clear-cut winner probably won’t necessitate device upgrades.  Many of the video display manufacturers are working hard to support multiple variants of HDR, if not all of them.

For the sake of brevity, we’ll just touch upon the different variations of HDR.  Currently, four competing standards have been pushed into the market. The two frontrunners are HDR10 and Dolby Vision.  As you might guess, the latter is promoted by Dolby Labs and is thus proprietary, while the former is more open-standards-based and supported by a variety of device manufacturers who—not to put too fine a point on it—want to avoid paying royalty fees and adopting a standard they don’t control.  The differences between these two are not necessarily negligible, but suffice to say that each one enables at least 2 additional bits for increased color depth as well as brightness increases into the thousands of nits (a nit being a common measurement of light intensity).

The other two HDR standards include HLG and Advanced HDR. HLG—Hybrid-Log Gamma—was developed more for live broadcast video. Advanced HDR is the newest format to hit the industry and is also geared toward live broadcasts.  These two formats both likely will be supported by mainstream HDR devices as they evolve into more widely adopted formats.

The big takeaway here is that these four standards really don’t rise to the level of a winner-take-all standard.  Each one was developed for very specific (and often different) purposes, so moving forward a convergence of all of them into a single display device that supports all of them simultaneously is highly likely.  Perhaps the war is over even before it starts.

The Effect of HDR on Post-Production Storage Infrastructures

While this is all great for the consumer, who craves (and receives) a higher-resolution picture with much-improved color range, it puts post-production facilities in a bit of a quandary in terms of their workflows.  Why? In a single word, “more.” With HDR, the signal contains more information, and that means that at an infrastructure level, you need to have more resources to process it, to run through post-production workflows, and to edit it.  HDR requires more bandwidth, more throughput, and more raw storage capabilities from the storage infrastructure underpinning the post-production facility.

Come to find out, much of the content and video footage captured since 2007 has been HDR-ready.  Anything that’s been shot on an Alexa or RED camera for the past decade or so, for example, has been 12- or 16-bit raw video footage and is fully capable of the dynamic color range defined by HDR.  Up to this point in time (meaning prior to HDR), post-production workflows have simply been eliminating the excessive information in that raw footage during editing. However, with that raw footage a post-production workflow can now incorporate HDR-compliant output.  Again, if the infrastructure supports it.

OpenDrives is a storage solution company that truly understands post-production workflows and the infrastructure requirements needed to support cutting-edge advances such as HDR.  Our founders and many of our professionals came directly from the media and entertainment industry, encountering many of the obstacles that HDR presents. Our NAS solutions excel at the workflow activities needed to work with the uncompressed raw video streams.  Whereas other storage solutions falter during playback, OpenDrives enables seamless playback without the time-consuming workaround of pre-loading project files at the workstation level to get them into cache. With OpenDrives, users can view and work with uncompressed project files in real-time, although our solutions are capable of faster-than-real-time performance.  You’ll never have to pre-scrub through projects just to get smooth playback.

Back in the day, color range was all about getting the right 8 bits.  All that has changed with HDR. With cameras capturing raw footage capable of much more than 8 bits, and with standards such as HDR (or its several variants) guiding device makers toward supporting increased color ranges, the onus is on the post-production shops to work with raw footage seamlessly and output productions that wow an audience.  OpenDrives can play a critical role in creating a storage infrastructure that meets current needs as well as grows and expands with your operation. Take advantage of what HDR can offer. Audiences will thank you for it.

We know that so much more goes into supporting post-production workflows with HDR.  This article just scratches the surface. Reach out to OpenDrives today, and let’s talk about a storage infrastructure that thrives—not chokes—on HDR workflows.